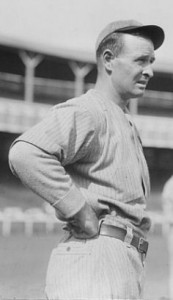 The first few years of the century the Cubs conducted spring training in Frank Chance’s home state of California (in Los Angeles and Santa Monica). During their first pennant season of 1906, they trained in Champaign, Illinois. The site of spring training before their first World Championship (last year) was New Orleans, Louisiana.

This season spring training is being held in Vicksburg, Mississippi.

Mississippi is unnerving to Frank Chance (photo), a notoriously superstitious man. For a man who always insists on berth 13 in a train—and if he can’t get it, writes 13 on the door, there are bad omens all around. Before every game, he looks for four leaf clovers. He hasn’t found a single one in Mississippi.

He’s also a little alarmed at some of the weird injuries that have occurred here. One of the key members of his starting rotation, Jack Pfiester, got his thumb stuck in a bowling ball. His teammates tried everything they could to get it out, but they were unsuccessful. A local man suggested that they put Jack’s entire hand–including the bowling ball–into a vat of lard. This does the trick. The thumb is out, but it’s still a little sore. Shortstop Joe Tinker has an even stranger injury. His hand is bandaged after being cut by a parrot’s claws.

This week the team also encounters a truly ugly experience at an exhibition game in Birmingham, Alabama. A half dozen members of the team completely lose their composure because of what they feel is inferior umpiring. The verbal abuse is so severe, that the umpire will sue them before they break camp.

Chance is worried that Mississippi is an unlucky place. They will never train there again. 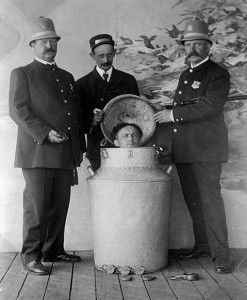 ~Harry Houdini turns 34 years old (March 24). He is touring the United States performing his brand new trick–challenging the public to come up with something that can hold him–including nailed packing crates, mailbags, and even the belly of a whale that washed ashore in Boston. The world-famous magician/escape artist will die as the result of injuries from a punch in the stomach before his 53rd birthday.

~A baby born in London to Quaker parents, David Lean (March 25), will one day direct the films Lawrence of Arabia and Bridge on the River Kwai.

~Conductor Arturo Tuscanini turns 41 (March 25). Next decade he will run for the Italian Parliament as a Fascist.

~Robert Frost turns 34 (March 26). He is an English teacher at Pinkerton Academy in New Hampshire.

~Meat magnate Oscar Mayer celebrates his 49th birthday in Chicago (March 29). He is already a multi-millionaire, and will live another 47 years. His bologna really did have a first name, and it really was spelled O-S-C-A-R.

~The US Military announces that they will establish “Remount Depots” in the Midwest for the cavalry, so that horses don’t have to travel as far.

~The Christian Science Monitor is founded, and publishes its first newspaper.

Price Check: A 165 pound school bell is $6.12. It is “no longer regarded as a luxury, but is a prime necessity, for it not only serves the purpose, pupils will not be continually straggling in to interrupt and delay the duties of the day, but it does much to instill the habits of punctuality in your children.”

If you travel back in time, don’t promise to get a child an ice cream cone unless you’re in St. Louis. They won’t become popular elsewhere until the 1910s.