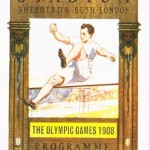 The Summer Olympics open in London on July 13th. The games had been scheduled to take place in Italy, but the eruption of Mt. Vesuvius in 1906 had devastated Naples and London was chosen as the alternative site. Twenty-two nations are competing, including the United States. White City Stadium is built in London to accommodate the games, and will remain an important sporting venue until it’s demolition in 1985.

Several things happen for the very first time at these Olympic games. 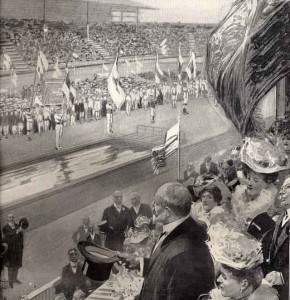 The King of England is on hand to witness the festivities (photo). Before the games are over he inadvertently causes the length of the marathon to be changed forever. His choice of the finish line’s location isn’t challenged, and Princess Mary’s request that the race start in front of the Royal Nursery isn’t either. After the 1908 Olympics this slightly unusual distance is adopted as the universal marathon distance (26 miles, 385 yards.) Before 1908, a marathon was only 25 miles.

John Taylor becomes the first African American to win an Olympic medal. He is a member of the 400 meter relay team, but will die tragically after returning to America in December. Also, women are competing for the very first time. Among their events, Archery and Figure Skating.

*Charles Comiskey options the land that will become Comiskey Park.

*One of the wily old veterans on the Cubs, outfielder Jimmy Slagle, celebrates his 35th birthday (July 11). He is known as the “Human Mosquito” because he’s such a pest. His other nicknames are Rabbit (because of his speed), and Shorty (because of his height—5’7″). Jimmy is well respected by his teammates, and is one of six college boys on the Cubs team (very few teams have that many college graduates). Slagle has been the starting centerfielder with the Cubs since 1902, but his run with the team is almost over. He is showing signs of his age, and by the time the Cubs reach the World Series, Solly Hofman will claim the starting job. Slagle will play his last game for the Cubs on October 3, 1908. He won’t get an at-bat during the World Series, and will retire after the last out is recorded.

*The Cubs go 4-3 this week and sit atop the National League standings with a record of 45-30. Big Ed Reulbach wins two of the games, defeating the Dodgers and the Phillies. They are gearing up for one of the biggest series of the year. Their arch rival Giants come to town next week for a 4-game series at West Side Grounds. 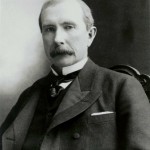 *It’s a big week for the Rockefellers. John D. Rockefeller (photo) is the richest man in the world, and Standard Oil is still a monopoly for another three years. He turns 69 (July 8) on the same day his grandson, future Vice President Nelson Rockefeller is born in Maine. Nelson will die 70 years later while um…let’s call it “giving dictation” to his secretary.

*Mendel Berlinger is born on July 12th in Manhattan to paint and varnish salesman Moses Berlinger and his wife Sadie. Mendel will eventually go into show business and change his name to Milton Berle.

*Elywn Brooks White turns 9 years old in Mount Vernon, New York. He will adopt the pen nameE.B. White and will go on to write “Charlotte’s Web” and “Stuart Little.”

If you travel back in time, and you’re worried about developing skin cancer from the harmful UV rays, you aren’t worried for nothing. Suntan lotion won’t exist until 1941. (On the other hand, the ozone layer is in much better shape).