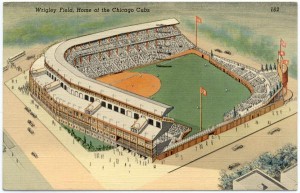 ~On January 1, 2009, Wrigley Field was turned into an ice arena. The Detroit Red Wings came to town and played the Chicago Blackhawks in an actual NHL regular season game. They called it the 2009 NHL Winter Classic. It was the first sporting event at Wrigley that wasn’t a baseball game since the Chicago Sting played their final home game at Wrigley in 1984. Sadly, the Blackhawks lost the game 6-4.

~In January of 1928, Andy Frain pitched William Wrigley on providing security for the ballpark. At the time, Wrigley Field was known as a place that ushers would take bribes to allow people into the good seats. Frain offered to give back Mr. Wrigley’s money if he wasn’t completely satisfied with his performance . Wrigley was so impressed he hired Frain to run the entire show, and gave him $5000 for uniforms. Those uniforms became his company’s trademark. In the 1930s, 40s, and 50s, the Notre Dame blue and gold Andy Frain uniforms were on hand at every major sporting event in Chicago, including football, baseball, and hockey games. They also kept the peace at political conventions, the Kentucky Derby, and more.

Here are a few tips for keeping the peace, directly from the mouth of Andy Frain…

*”No muscle is gonna clip me. I never had a nickel. Finally after a lot of hard work I made something of myself. They’re gonna take that away from me?”

*”Ninety percent of the public wants somethin’ for nothin’. When you run a big sports event, every one of those seats is there to be cracked. They throw every gimmick in the book at you.”

*”The only color I’m interested in is the color of the customer’s ticket.”

*”There’s nothing like a six-footer in uniform to control a panicky crowd. Besides that, a tough guy isn’t so likely to give you an argument if you’re lookin’ down on him. That’s psychology.”

*”Never let a standee sit down. Once they sit down, you can’t get ’em up.”

Andy died in 1964. His sons carried on the company until 1982 when they sold it to a group of investors from Cleveland. The people that bought it went belly up a few years later and the Frain brothers repurchased the company once again. They finally sold it off for good in 1991. 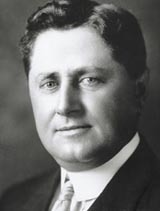 ~On January 26, 1932, William Wrigley died. It was a great loss for the Cubs, not only because Wrigley was a savvy businessman. He was also the last owner before Tom Ricketts that LOVED baseball. This is William Wrigley in his own words, in Time Magazine in 1930…

“Outside of school hours, when I was a boy in Philadelphia, I worked for my father. This seemed to me a cruel conspiracy of the fates. He was a kind man, but he belonged to a generation which was work-minded. Baseball was nothing to him. My work took me directly past the ball park of the Nationals (the Phillies). That was the trouble! I hadn’t a chance in the world to get away to the ball game on any of the familiar alibis. The near relatives of my boy friends were buried regularly on ball game days. No use to tell my employer of the imaginary funeral in my family, for he was my father and had the death statistics of the family down to the minute. No other excuses worked. Whenever I came to the ball park and heard the wild cheering within, I was in a state of rebellion. One day when the cheering was particularly wild in the park, I resolved that one day I would own a ball team and a ball park. My interest in the game has never relaxed for one instant from that moment to this.”

On his deathbed, William Wrigley made his son Phillip promise never to sell the team. Even though Phillip didn’t much care about baseball, he honored his father’s wish, and held on to the Cubs until his own death in 1977. Under the son, the Cubs atrophied and became the worst team in baseball, but they still played, and continue to play in the stadium that is named after his father; baseball lover William Wrigley.