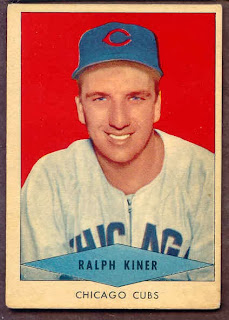 Hall of Famer Ralph Kiner passed away yesterday. He was 91 years old. The New York Times has a wonderful obit.

A few teams can lay claim to the great slugger. He wears a Pirates cap in the Hall of Fame. He was the broadcaster for the New York Mets for many years.

But he was also a Cub.

He was one of the most feared sluggers in the league when he played for the Pirates, but by the time the Cubs got him (1953), he was not the same player. He led the league in home runs all seven seasons with the Pirates, and though he did have a decent power season with the Cubs in 1953 (making the all-star team), he was so slow by then, he could barely field his position.

Combined with the equally slow Hank Sauer in right, the Cubs outfield during those two seasons might have been the worst fielding outfield the Cubs ever had. Kiner joked that both he and Sauer used to scream “You got it, Frankie” every time the ball was hit in the air. Frankie Baumholtz was the centerfielder on that team.

After the 1954 season Kiner was traded to the Indians for Sam Jones, who went on to pitch a no-hitter for the Cubs in 1955.

Ralph lived a nice long life. What was the secret to his 91 years? It might have been his Wheaties…