Today is the first day of Oktoberfest in Munich, so we are honoring all of the Cubs players born in Germany. There are more than you think…

~Heinz Becker 1915 (Cubs 1943-1946)
Rollie Zeider, a player on the 1918 pennant winning Cubs, was famously nicknamed Bunions. But he wasn’t the only one. On the last pennant winning Cubs team (1945), another Bunions got significant playing time. His name was Heinz Becker. Becker had problems with his feet during his playing career, which is how he got the nickname. (Becker was referenced in Chicago columnist Mike Royko’s annual Cubs quiz on April 18, 1968: “Q: Which of these two players always had sore feet? Heinz Becker or the immortal Dominic Dallessandro? A: Becker had sore feet. Dallessandro had tiny feet. It used to take him twenty jumps to get out of the dugout.”) Born in Berlin, Germany in the midst of World War I, Becker got his chance to play in the big leagues because so many players were World War II draftees. Bunions spent most of his short career as a back up, but he did help the Cubs win the National League Pennant in 1945. He played in 3 games of the World Series against the Detroit Tigers, singling and walking in three at bats. The Cubs traded him to the Indians the following spring.

~Ed Eiteljorge 1871 (Colts 1890)
Ed was born in Berlin, Germany, but came to America as a boy. When he joined the Cubs (then known as the Colts), he was still only 18. If you want to see Ed pitch in a Chicago uniform, set the wayback machine to May 2, 1890. He pitched two innings and gave up seven runs. He never pitched for Chicago again.

~Edwin Jackson 1983 (Cubs 2013-2015)
Edwin was born in Neu-Ulm, Germany. Jackson was the first free agent signed by the Theo Epstein regime (4 year, $40 million), and they probably aren’t happy about it. Edwin came to Chicago with decent credentials. He had pitched a no-hitter, and appeared in two World Series and one All-Star game, but it hasn’t worked out for Edwin with the Cubs. In 2013 he lost a whopping 18 games, and finished with an ERA of nearly five. In 2014, he was worse. He did have a part in setting a record with the Cubs, however. He and Michael Bowden combined to throw five wild pitches in one inning. In his last season with the Cubs (2015), he pitched exclusively out of the bullpen. The Cubs released him at the end of July, and he finished the year with the Atlanta Braves.

~Jack Katoll 1872 (1888-1889 Orphans)
Known as “Big Jack” or “Katy”, Katoll was one of several Cubs (then known as Orphans) players to be born in Germany. He started four games for Chicago over two seasons, and threw three complete games. He later also pitched for the White Sox and Baltimore. After his playing career he settled in the Chicago area.

~Marty Krug 1888 (Cubs 1922)
Krug was a German immigrant from Koblenz who came to this country as a child. He was a pretty good hitter, but was such a bad fielder that it kept him out of the big leagues for most of his baseball career. He came up for a cup of coffee in 1912, and didn’t return for an entire decade. The Cubs gave him lots of playing time in 1922 because they wanted his bat in the lineup. The infielder hit .276 and drove in 60 runs in 127 games. He also committed 21 errors, third worst total in the league. After his playing career, Krug went into coaching and scouting. He famously missed badly on one prospect. A kid he called “too fragile” eventually made it to the big leagues and did OK for himself. His name was Ted Williams.

~Craig Lefferts 1957 (Cubs 1983)
Craig was born in Munich, Germany. Lefferts was a promising young rookie lefthanded reliever with one good season under his belt when the Cubs included him in the trade that brought Scott Sanderson to the Cubs. Lefferts ended up in San Diego in that three-way trade, and had a very good career there as a reliever. Ironcially, the highlight of his career was probably the 1984 NLCS against his old team, the Cubs. Craig appeared in three of those games and was the winning pitcher in both games that crushed the hearts and spirits of Cub fans–the Garvey game (Game 4) and the Leon game (Game 5). He later also pitched against the Cubs in the 1989 NLCS for the San Francisco Giants. Lefferts saved over a hundred games in his twelve year big league career.

~Fritz Mollwitz 1890 (Cubs 1913-1914, 1916)
Fritz was born in Germany (Coburg) and played in the big leagues during World War I–a time when Americans were being told that the Huns (Germans) were eating babies. He certainly got his fair share of grief, but not as much in a very German town (at the time) like Chicago. Mollwitz was a backup first baseman for the Cubs. He didn’t get a lot of playing time in Chicago, but later had a very good season with the Pirates in 1918. His native country may have lost the war that year, but Fritz stole more than 20 bases as Pittsburgh’s starting first baseman.

~Will Ohman 1977 (Cubs 2000-2007)
Will was born in Frankfurt, Germany. Ohman was a lefty reliever who experienced some severe arm troubles while he was a member of the Cubs. Those arm troubles caused him to undergo Tommy John surgery and miss the entire 2002-2004 seasons. When he finally returned to the big leagues as a situational lefty, he had some success. In 2005 Ohman appeared in 69 games for the Cubs and posted a 2.91 ERA. That was probably his best season in Chicago. He later also pitched for the Braves, Dodgers, Orioles, Marlins, and White Sox.

~Skel Roach 1871 (Orphans 1899)
Roach was born in Germany, and if his name doesn’t sound German to you, there’s a good reason for that. His given name was Rudolf Weichbrodt. His teammates in semi-pro baseball couldn’t (or didn’t want to) pronounce his name. His manager thought he was skinny, so he called him Skeleton (or Skel for short). Another teammate gave him his last name Roach. Thereafter he went by Skel Roach. He only pitched one big league game, filling in for injured HOFer Clark Griffith. He won the game, but couldn’t come to contract terms with Chicago to stay with the team. He never got another chance.

~Reggie Richter 1888 (Cubs 1911)
Reggie (real first name–Emil) was born in Dusseldorf, Germany and came over to America around the turn of the century. Reggie was a pitcher who worked mostly out of the bullpen for one big league season. He pitched a few more years in the minors before hanging up his spikes at the age of 27. Richter passed away in Winfield, Illinois at the age of 45.

And even though he wasn’t technically born in Germany, is there anyone more German than this man… 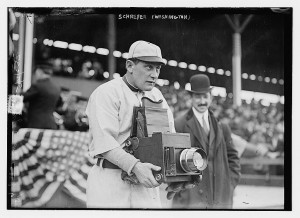 ~Germany Schaeffer 1876 (Orphans 1901-1902)
He was born in a town that boasted nearly 25% German heritage–Chicago, Illinois–and his parents were fresh off the boat immigrants. So naturally, he got the nickname Germany. He began his big-league career in his hometown, but really made a name for himself in Detroit. He was the starting second baseman for the Tigers in both of their World Series losses to the Cubs (1907 & 1908). Germany was known for his wackiness. He once stole second base to attempt to force a throw, allowing a teammate to score from home. When the catcher didn’t fall for it, Germany stole first base on the next pitch, so he could try it again. Here’s another colorful story from the Baseball Biography Project:

According to teammate Davy Jones in The Glory of Their Times, Germany announced to the crowd: “Ladies and gentlemen, you are now looking at Herman Schaefer, better known as ‘Herman the Great,’ acknowledged by one and all to be the greatest pinch-hitter in the world. I am now going to hit the ball into the left field bleachers. Thank you.” Facing Chicago’s Doc White, Schaefer proceeded to hit the first pitch into the left field bleachers for a game-winning homer. As he made his way around the diamond, Germany supposedly slid into every base, announcing his progress as if it were a horse race as he went around. “Schaefer leads at the half!” and so on. After hook-sliding into home, he popped up, doffed his cap, bowed, and said, “Ladies and Gentlemen, this concludes this afternoon’s performance. I thank you for your kind attention.”

Germany Schaefer died way too young, from a hemorrhage at the age of 42. He had only been retired for about a year.