On this day in 1886 the corporation Johnson & Johnson was founded. In honor of that corporate giant, today we’re featuring all the Cubs named Johnson…and there were quite a few.

~Abe Johnson (Colts 1893)
Abe was an obscure pitcher who pitched exactly one inning for the Cubs on July 16, 1893. There is no record of his birthdate or whether he was a righty or a lefty, but we do know that he gave up four earned runs in his one inning of big league ball, and finished with a 36.00 ERA.

~Ben Johnson 1931 (Cubs 1959-1960)
Johnson was basically a career minor-leaguer. He played sixteen years in the minors and only had two small cups of coffee with the Cubs. He pitched well as a 28-year-old rookie in September of ’59, which led to a more extended shot the following season. He pitched out of the bullpen for seventeen games and registered an ERA of nearly 5. His big league career never made it into his 30s.

~Bill Johnson 1960 (Cubs 1983-1984)
He was acquired along with Dick Ruthven for Willie Hernandez (a terrible trade in retrospect) from the Philadelphia Phillies. Johnson was a September call up for the Cubs in both the 1983 and 1984 seasons, but didn’t get a lot of opportunities to pitch. He appeared in 14 games and posted a 3.57 ERA. Hernandez went on to win the Cy Young Award.

~Cliff Johnson 1947 (Cubs 1980)
Johnson was a slugging catcher who hit nearly 200 career homers. Ten of those came with the Cubs in the second half of the 1980 season. The Cubs were very bad that year, but Johnson’s dramatic homers helped brighten a dark summer. After leaving the Cubs he became what he probably should have been all along–a designated hitter with the A’s, Blue Jays, and Rangers. 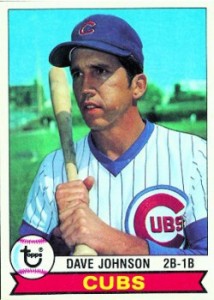 ~Davey Johnson 1943 (Cubs 1978)
Davey Johnson had a very distinguished playing career before he became a manager. He was a four-time All-Star, three time Gold Glove second baseman, two-time World Series champ, and once hit 43 homers in a season, but by the time he came to the Cubs, those days were in his rearview mirror. The Cubs got him from the Phillies in August of 1978, and he played with them for the last few months of his big league career. He went into coaching shortly thereafter and has since won six divisional championships and a World Series title (with the 1986 Mets) as a manager. (Photo: Topps 1979 Baseball Card)

~Don Johnson 1911 (Cubs 1943-1948)
Johnson was the starting second baseman for the last pennant winning Cubs team in 1945. He was an energetic infielder, and his teammates called him “Pep.” Johnson was a young phenom in the minor league system, and the Cubs thought so highly of his eventual development, they traded their Hall of Fame second sacker Billy Herman. Then, they traded the other second baseman on their team, future all-star Eddie Stanky, and gave the job to Johnson. In 1944, Johnson was an all-star himself, leading all 2B with 71 RBI. He also, unfortunately, committed 44 errors. Johnson had another all-star season with the bat in 1945, hitting .302, but after the players returned from the war in 1946, he was exposed as a liability. Johnson became a non-factor in 1947 and 1948 (his last season in the big leagues) while Eddie Stanky led two different teams to the NL pennant. Some Don Johnson trivia: His father Ernie also had a Chicago connection. He was signed by the Chicago White Sox to replace banned shortstop Swede Risberg after the Black Sox scandal, and remained in the big leagues for ten years. In 1925, exactly twenty years before his son would play in the World Series, Ernie Johnson played in the World Series for the New York Yankees.

~Footer Johnson 1932 (Cubs 1958)
His real name was Richard Allen Johnson, but everyone called him Footer or Treads because he was fast. He was known for his speed in the minor leagues and at Duke University (he was there the same time as Dick Groat), but he didn’t make much of an impact in his very short major league career. In 1958, Footer got a grand total of 5 at bats in 8 games (his other three appearances were as a pinch runner), but never got a hit. He did, however, score one run when he pinch ran for Cubs catcher Sammy Taylor during a double header on June 22nd. He was knocked in by another obscure Cub…future manager Chuck Tanner.

~Ken Johnson 1933 (Cubs 1969)
Johnson only pitched the final two months of the 1969 season for the Cubs. When he joined the team they were riding high, with a big lead over the Mets. Six weeks later the season was over and the Cubs were eight games behind the Mets. It’s probably unfair to say that Johnson was a bad luck charm, but his previous claim to fame makes you wonder. In 1964 while pitching for the Houston Colt 45s, he pitched a nine-inning no-hitter…and lost the game 1-0. He’s the only pitcher in big league history to ever do that. 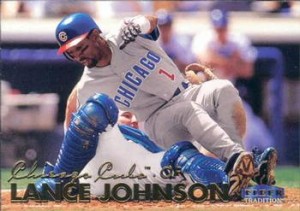 ~Lance Johnson 1963 (Cubs 1997-1999)
Johnson had a very impressive 14-year big league career that included playoff appearances with the Cardinals (1987) White Sox (1993), and Cubs (1998), and an all-star appearance as a member of the Mets (1996). He was a speedy centerfielder who hit for average (lifetime .291), hit lots of triples (he led the league five times), and stole base (327 lifetime). With the Cubs playoff team of 1998, he was the leadoff man to a lineup that featured the likes of Sammy Sosa, Mark Grace, and Henry Rodriguez. Unfortunately, he managed only two hits in that playoff series. Lance left the Cubs after an injury plagued 1999, and finished his career with the Yankees. His nickname was One Dog, because he wore #1. (Nickname courtesy of Hawk Harrelson) (Photo: Fleer 1999 Baseball Card) 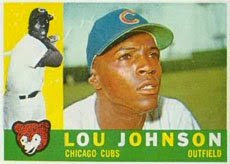 ~Lou Johnson 1934 (Cubs 1960, 1968)
His nickname was Sweet Lou or Slick. Lou played for the Cubs in two different seasons, his rookie year and his second to last season in the big leagues, and neither of those seasons were particularly remarkable. Lou is probably better remembered for what he did against the Cubs, when he was on the Dodgers. He scored the only run in Sandy Koufax’s perfect game against the Cubs. The score was 0-0 in the bottom of the fifth and neither pitcher had allowed a single base runner. That ended when Cubs pitcher Bob Hendley walked Lou to lead off the inning. The next batter, Ron Fairly, bunted the ball a little too hard–right to the pitcher. Hendley was prepared to whirl toward second and throw out the lead runner, but he took his eye off the ball for a second, dropped it, and had no choice but to throw to first. Now Johnson was darting off second base. Hendley focused on the hitter, Jim Lefevbre, which allowed Johnson to take off for third. Cubs catcher Chris Krug threw to Santo, but the Cubs great couldn’t handle the throw. Johnson ran home with the first and only run of the game. The Dodgers had scored without the benefit of a hit. They later got exactly one hit, but it didn’t factor in the scoring. (Photo: Topps 1960 Baseball Card)

~Pierce Johnson 1991 (Cubs 2017)
The former first round draft choice finally made the big leagues for the Cubs in the summer of 2017, but only pitched in one game. The Cubs made three errors in his only inning pitched. He was waived in September. 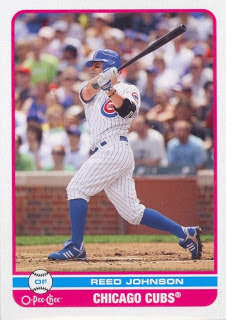