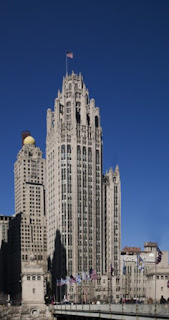 Colonel Robert McCormick broke ground on the Tribune Tower. Sixty years later the Cubs would be run by the men in that tower, but in 1923, they were still run by William Wrigley. Wrigley had commissioned the building of his own magnificent structure across the street from McCormick’s Michigan Avenue location just a few years earlier.

In 1923 it was the crown jewel of Chicago’s skyline.

The Tribune Tower (photo) opened to rave reviews in 1925. The statue of Nathan Hale still greets people, as do the carved images of Robin Hood (representing the architect Hood) and a howling dog (representing the architect Howells) above the entrance. Also, parts of important historical sites (brought back to Chicago by Tribune correspondents) still grace the base of the structure, including stones from such sites as the Taj Mahal, the Parthenon, and the Palace of Westminster, petrified wood from the Redwood National and State Parks, and pieces from the Great Pyramid, The Alamo, Notre-Dame, Abraham Lincoln’s Tomb, the Great Wall of China, the Berlin Wall, and most recently, the World Trade Center in New York.

May 22, 1958. Jerry Lee Lewis announces in London that he has married his 13-year-old cousin Myra. The Cubs, behind the pitching of Moe Drabowsky and the hitting of Ernie Banks (4 RBI) beat the Phillies 7-4 at Connie Mack Stadium in Philly.

May 23, 1934. Outlaws Bonnie & Clyde are gunned down by lawmen in Louisiana. In New York, Mel Ott homers in the first, and Guy Bush loses his first game of the year. Final score: Giants 5—Cubs 2.

May 24, 1883. After 14 years of construction, the Brooklyn Bridge is finally opened, connecting Brooklyn to Manhattan for the first time. In Chicago, the first place Cubs (then known as the White Stockings) lose 9-5 to the Providence Grays.

May 25, 1977. The movie “Star Wars” opens across the country. The Cubs, behind the pitching of Ray Burris and the hitting of Bobby Murcer, beat the Expos 7-3 at Wrigley Field.

May 26, 1897. The novel “Dracula” is published by Irish author Bram Stoker. Hall of Famer Clark Griffith leads the Cubs (then known as the Colts) to a 6-2 win over the Giants at West Side Grounds.

May 27, 1941. The Royal Navy sinks the legendary German battleship Bismark. The Cubs lose in the bottom of the 9th to the Cardinals at Sportsman’s Park. Future Hall of Famer Johnny Mize gets the game-winning hit.

May 28, 1937. The German government, led by Adolf Hitler, announces the establishment of a new automobile company—Volkswagen. Charlie Root and the Cubs beat the Reds 12-3 at Wrigley Field. 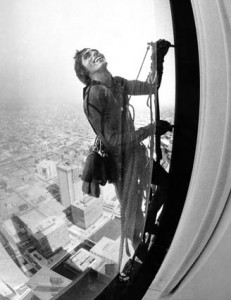 On Memorial Day, May 25, 1981, wearing a homemade Spider-Man suit and using suction cups and sky hooks, Dan Goodwin successfully climbed up the 110 story Sears Tower in Chicago. It took seven hours for him to make it to the top, and he faced many obstacles along the way including the Chicago Fire Department who tried to stop him several times. It was also a windy day, and near the top, the winds were severe. A few feet below the top, Goodwin taped an American flag to the building to honor his father who fought in the Korean War. Chicago’s press dubbed him Spider Dan.

At the same time that Spider Dan was climbing the Sears Tower, the Cubs were playing their most exciting game of the season. The Pirates had an eight run lead in the fourth when the Cubs mounted their comeback. The Cubs scored four in the bottom of the fourth on two singles, three walks and two errors, and another four in the bottom of the eighth on a home run by Steve Henderson and Bill Buckner double, among other things, but after eight innings Pittsburgh was still leading 9-8.

In the bottom of the ninth inning, Steve Henderson, in what was probably his greatest game as a Cub, hit another home run to tie the game and send it into extra innings. He also sparked the rally that won the game in the 11th. Leon Durham led off the inning with a single and went to third on Steve Henderson’s single. That brought up right fielder Scott Thompson. The former first round draft pick of the Cubs had fallen on hard times since his sparkling rookie season, and would end the year with an average of .165, but on this Memorial Day with a Spiderman climbing the Sears Tower on the other side of town, Scott Thompson knocked in the game winning run.