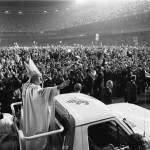 Future Pope (and Saint) John Paul II is born in Poland. Grover Cleveland Alexander is on the mound at Cubs Park in Chicago, and he beats the Giants 4-2. He also knocks in the game winning run. Cleveland could have never guessed that this boy born in Poland would one day be more popular in Chicago than him one day.

Chicago proves it’s collective devotion to John Paul II on October 5, 1979. That’s the day the most famous person in the world, Pope John Paul II visits Chicago. The brand new Polish Pope is visiting a city with 500,000 Polish people, the second largest Polish population (after Warsaw) in the world, and a city with one of the largest Roman Catholic populations in America. Needless to say, this is a very big deal.

Chicago goes absolutely apoplectic at the Pope’s arrival. They cheer as his motorcade drives from O’Hare to downtown via the Kennedy Expressway. He is in the back seat of a limosine that has been specially lighted so the light shines down on his face. The limo drives at a slow, steady pace, allowing everyone to wave to him. He smiles and waves back to the crowds.

First he gives a speech at Quigley Preparatory Seminary South in front of 350 bishops. Then he travels to Grant Park and says mass to an estimated crowd of over 200,000 worshipers. He conducts the mass in English. During his 40 hours in Chicago, he also says mass on Chicago’s south side. Part of 43rd Street near Five Holy Martyrs Catholic Church is renamed after him. (The Catholic school at that church is now called Pope John Paul II School.)

Unfortunately, the blessings the Pope brings to Chicago come too late for a certain club on the north side of the city, because two days before Pope John Paul II landed in Chicago, the Cubs announced the name of their new manager: Preston Gomez. Gomez’ track record included one of the worst winning percentages in baseball history (.392). He had managed for the Padres and the Astros and was a colossal failure both times. Needless to say the same thing happens with the Cubs. He doesn’t make it through the entire 1980 season before he is fired. The Cubs are 39-51 at the time.

May 15, 1960. The Soviet Union launches Sputnik 4. Don Cardwell no-hits the Cardinals in his first start with the Cubs. Moose Moryn makes a great catch to end it.

May 16, 1918. The U.S. Congress passes the Sedition Act, making it illegal to insult or abuse the U.S. Government. A Cubs rally falls short at Weeghman Park, as the Cubs lose 6-5 to the Philadelphia Phillies.

May 17, 1954. The Supreme Court hands down a unanimous decision in the Brown v. Board of Education of Topeka case, ending racial segregation in schools. The Cubs beat the Pirates 10-6 at Forbes Field. The Cubs lineup features the first two African Americans to ever play for the Cubs (Ernie Banks and Gene Baker) in their first full season with the team.

May 19, 1965. Pete Townshend of the Who writes “My Generation” on his 20th birthday. The Cubs beat the Giants 2-1 at Wrigley Field. Ernie Banks knocks in both runs for the Cubs off Gaylord Perry.

May 20, 1927. Charles Lindbergh departs aboard the Spirit of St. Louis from Long Island, New York on the first transatlantic flight. The Cubs are not far away, in Brooklyn, beating the Robins 7-5. The hitting star for the Cubs is pitcher Tony Kaufmann, who also got the win.

May 21, 1881. Clara Barton founds the American Red Cross. The Cubs (known then as the White Stockings) break protocol and bat first despite playing in Boston. They win 4-2.