Historical Events (May 1–May 7): Where were the Cubs? 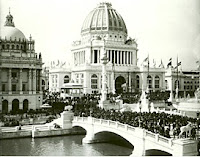 May 1, 1893
The Columbian Exposition opens in Chicago. It is the biggest World’s Fair the world had ever seen, scheduled to begin on the 400th anniversary of Columbus’ discovery of the new world.

It covers 600 acres, features 200 or so brand new structures and buildings (many designed by Daniel Burnham), and attracts more than 27 million spectators to the city. It’s located in Jackson Park and the Midway Plaisance, in the neighborhoods of Jackson Park Highlands, South Shore, Hyde Park and Woodlawn. This is more than a World’s Fair. It is Chicago’s coming out party–it’s chance to prove to the world that it has recovered from the disastrous Chicago Fire of 1871.

Dedication ceremonies for the fair were held on October 21, 1892, but the fairgrounds were not actually opened to the public until May 1, 1893. President Grover Cleveland is on hand that day. The fair continues until October 30, 1893.

The big draw is the world debut of the Ferris Wheel, but there are many other notable moments of the fair. Scott Joplin performed there, and introduced Ragtime music to a wider audience. A dancer named Little Egypt introduced the Middle Eastern culture to many Americans for the very first time.

And yes, a certain baseball team was already playing in Chicago at the time. 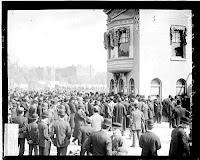 1893 was the Chicago Colts (which is what they were known as in 1893) first season at West Side Grounds (photo), the ballpark that would be their home for both of their World Series triumphs (1907, 1908). It was built slightly west and north of the Columbian Exposition in a year which must have set records for construction in Chicago.

The Colts only played their Sunday games at the new ballpark however, because South Side Park (their home from 1891-1893) was closer to the Columbian Exposition and they hoped to draw fans from there.

It was a pretty uneventful season for the Colts, aside for a few moments. On August 8th the team was involved in a train crash between Cleveland and Louisville. Jimmy Ryan was cut badly in his face and neck, and a piece of glass had to be removed from his leg. He missed the rest of the season.

Cap Anson (41 years old) made history by becoming the first pinch hitter in team history. He pinch hit in the tenth inning and got a single as the Cubs won in extra innings.

As the Exposition ended in October of 1893, so did the season for the Chicago Colts.

They finished in 9th place in a 12 team league.

May 1, 1960. American U-2 spy plane piloted by Francis Gary Powers is shot down over Russia. The Cubs beat the Cardinals 5-4 at Busch Stadium in St. Louis. Tony Taylor doubles in the winning run for the Cubs.

May 2, 1918. General Motors buys Chevrolet to become the world’s biggest automotive company. Hippo Vaughn leads the Cubs to a 5-3 victory over the Pirates in Weeghman Park. Fred Merkle is the hitting star, driving in 4 of the 5 runs.

May 3, 1933. James Brown is born in Augusta Georgia. The Cubs beat the Giants 11-0 at the Polo Grounds in New York. Gabby Hartnett drives in five.

May 4, 1970. The National Guard kills four student protestors at Kent State University. The Cubs lose to the Astros at the Astrodome, 7-2.

May 5, 1955. Ten years after the war ended, the Allies end their occupation of West Germany. The Giants beat the Cubs 6-3 at the Polo Grounds. Only 3300 fans are in attendance.

May 6, 1937. WLS Radio news reporter Herbert Morrison and his engineer Charlie Nielsen were assigned to cover the arrival of the German airship Hindenburg in New Jersey. They record their reactions: “Oh the humanity!” The Cubs were in nearby Philadelphia, winning a rain shortened game against the Phillies.

May 7, 1915. A German submarine sinks the Lusitania off the south coast of Ireland. The Cubs lose 9-2 to the Cincinnati Reds at West Side Grounds. German born Fritz Mollwitz is the hitting star for the Reds, driving in four runs. 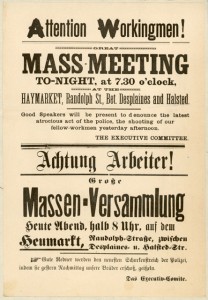 In the last few decades of the 19th century and the first few decades of the 20th century, Chicago was a hotbed of labor unrest. Chicago industry was notorious for it’s bad treatment of workers (later graphically depicted in “The Jungle” by Upton Sinclair), and Chicago as a city was openly hostile to the labor movement. On May 1, 1886, coordinated strikes and demonstrations were held nationwide, to demand an eight-hour workday for industrial workers. These demonstrations were controversial everywhere, but in Chicago they took an ugly turn just a few days later.

Striking workers and those supporting them gathered in Haymarket Square on May 4th, which was located at 151-199 N. Des Plaines Street in Chicago. Police arrived to disperse the peaceful assembly, but a bomb was thrown into the ranks of the police. The police opened fire, workingmen evidently returned fire, and seven policemen and an unknown number of workingmen were killed. The bomb thrower was unidentified, but that didn’t stop police from arresting eight men–all of them well known anarchists or labor activists who publicly criticized police behavior after the riots: Albert Parsons, August Spies, Oscar Neebe, Louis Lingg, George Engel, Adolph Fischer, Michael Schwab, Samuel Fielden. News of their arrests made headlines around the world. 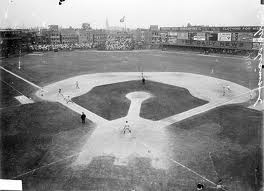 Meanwhile, just a few miles from the site of the riot, the citizens of Chicago were being entertained by an early version of the Chicago Cubs. The team was still known as the White Stockings at the time, and they played at a ballpark known as West Side Park (Congress, Loomis, Harrison, and Throop streets). It’s diamond pointed away from the lake, and the grandstand held 16,000 fans. During the worker demonstrations they were on the road in Kansas City and St. Louis—-and the afternoon before the Haymarket Square riot on May 4th, they lost their first game of the young season.

They didn’t lose many more.That 1886 team won the National League behind three Hall of Famers, Cap Anson, George King Kelly, and John Clarkson. Anson, called “Cap” because he was the captain of the team, still holds several Cubs records including most runs, most doubles, most hits, most RBI, and highest batting average. Kelly won the batting title in 1886 with a .388 average, and Clarkson won 36 games—which is pretty good, but nothing compared to the previous year (1885) when he won 53 games.

Another member of that 1886 team was Billy Sunday, who later became an evangelist preaching against the evils of Chicago. (The town that Billy Sunday could not shut down.) Sunday preached against the evils of alcohol and prostitution, but Chicago had another dark side that soon became evident to the rest of the world. With scant evidence against the accused, prosecutors put them on trial for the more general charge of inciting violence instead. The entire labor movement was considered at fault for this incident, and these eight men were the symbols of it. They were convicted by a jury of businessmen.

Of the eight men convicted for the crime, four were put to death. A fifth committed suicide in prison. The other three were later pardoned by Illinois Governor John Altgeld (photo), who considered the trial a gross miscarriage of justice. The Haymarket trial was followed closely by the entire world, and became a symbol of worker’s rights. It is considered to have been an important influence on the origin of international May Day observances for workers. The site of the incident was designated as a Chicago Landmark on March 25, 1992.

One Response to “Historical Events (May 1–May 7): Where were the Cubs?”