Historical Events (June 19–June 25): Where were the Cubs? 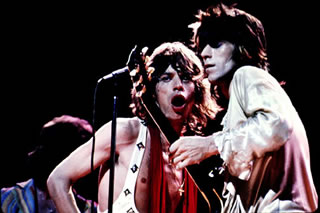 When the Rolling Stones came to Chicago in 1972, they were huge stars How huge? They stayed at the Playboy Mansion with Hugh Heffner. Robert Greenfield’s book, “S.T.P.: A Journey Through America with the Rolling Stones,” describes that Chicago trip this way…

“The couches pulse with women. In the nights to come, the Stones will have their own man on the door, selecting talent, but tonight the gathering is official…mostly bunnies, ex-Playmates, future Playmates, glossy four-color ladies with polished faces and made-up eyes. None of your New York city darkness here, no clean puritan New England faces or spaced-out California smiles; these ladies are the real thing: products of the heartland…”

But if you look at how Hef thought it about then, check out this memo quoted in “Hef’s Little Black Book” (by Heffner & Bill Zehme)…

The Stones were in town for four straight days at Hef’s place in 1972 (Hef didn’t go to any of the shows). They played three shows, one on the 19th and two on the 20th of June (all three at the Amphitheatre). While the Stones were jamming at the Amphitheatre, Carmen Fanzone was jamming at Wrigley Field. He played the National Anthem on the Trumpet before the Cubs beat the Dodgers 5-4 in 11 innings. Two days later, while the Stones were destroying the Playboy Mansion, Randy Hundley hit a grand slam in the first inning in a 15-8 rout of the San Francisco Giants. And while everyone on the Cubs and the Stones considered Chicago the center of the universe, a little noticed break-in occurred at the Democratic Party National Committee Offices in Washington. The Playboy Mansion staff weren’t the only ones that were going to be spending a loooong time cleaning up a mess.

June 19, 1953. Convicted spies Julius and Ethel Rosenberg were executed in the electric chair. The Cubs split a double header at Wrigley with the Brooklyn Dodgers. They win the opener 11-8 thanks to a grand slam by Handsome Ranson Jackson, a 3-run blast by Ralph Kiner, and a 2-run shot by Hank Sauer. Yes, the wind is blowing out.

June 21, 1964. Three civil rights activists working to register black voters were killed by the KKK in Mississippi. The Cubs sweep a double header in Pittsburgh, 2-1 and 7-2. Larry Jackson got the victory and knocked in both runs in the opener, and Billy Williams led the hit parade in game 2.

June 22, 1937. Joe Louis wins the heavyweight boxing title in Comiskey Park, with an eighth round knockout of Jim Braddock. (http://www.youtube.com/watch?v=5impNKGQkC4) . Several Cubs are in attendance. They had beaten the Giants at Wrigley Field 5-0 earlier in the day, a seven hit shutout by Bill Lee. 45,000 in the crowd for the boxing match and 27,000+ for the Cubs game.

June 23, 1972. Title IX is enacted prohibiting schools from discriminating against students because of gender, forcing schools to institute women’s athletic programs. The Cubs lose to the Pirates 4-2 at Wrigley Field. Roberto Clemente hits a two run triple off Fergie Jenkins to win the game.

June 24, 1995. Nelson Mandela cheers on the white South African rugby team in Johannesburg, a defining moment in a nation healing itself from Apartheid. The Cubs beat the Astros 5-2 at the Astrodome. Mark Grace knocks in three runs for the Cubs.

June 25, 2009. Michael Jackson dies at age 50. The Cubs face the Tigers at Comerica Park in Detroit, and lose the interleague battle 6-5. Jake Fox and Micah Hoffpauir homer for the Cubs.

One Response to “Historical Events (June 19–June 25): Where were the Cubs?”