Historical Events (July 24–July 30): Where were the Cubs?

July 25, 1941
Emmett Till is born on the south side of Chicago. His mother Mamie probably doesn’t care that the all-white Chicago Cubs are at Wrigley Field beating Boston 5-4, thanks to a 6th inning homer from Babe Dahlgren. Chicago is just as segregated as the big leagues. Emmett Till will live long enough to see Jackie Robinson come to Wrigley Field in 1947, but race issues in this country are far from over.

On August 20, 1955, Mamie Till rushes 14-year-old Emmett to the 63rd Street station in Chicago to catch the southbound train to visit relatives in Money, Mississippi. By now, Emmett’s hometown Cubs have a grand total of three African Americans on the roster. The only African-American pitcher on the roster, Sam Jones, loses the game 6-1 on the day Emmett boards the train. Earlier that season, he had became the first African-American to pitch a no-hitter in the Major Leagues.

On August 24, 1955 Emmett Till joins a group of teenagers at Bryant’s Grocery and Meat Market for refreshments to cool off after a long day of picking cotton. Bryant’s Grocery, is owned by a white couple, Roy and Carolyn Bryant, and sells supplies and candy to a primarily black customers. Emmett goes into the store to buy bubble gum, and some of the kids outside the store claim they hear Emmett whistle at Carolyn Bryant.

A few nights later in the middle of the night, Roy Bryant, Carolyn’s husband, and his half brother J. W. Milam, kidnap Emmett from his great uncle’s home. They brutally beat him, take him to the edge of the Tallahatchie River, shoot him in the head, fasten a large metal fan to his neck with barbed wire, and push his body into the river. 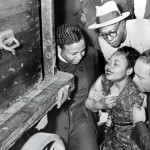 In Chicago, Mamie Till meets Emmett’s casket at the train station while the Jackson Daily News condemns the “brutal, senseless crime”. On the other hand, the newspaper also claims that the NAACP is working “to arouse hatred and fear” by calling Till’s murder a lynching.

The newspapers in the south may have believed that African-Americans were somehow the ones inciting hatred and fear, but most of America see this for what it is, a hate crime. Emmett’s murder helps inspire a movement. Just a few weeks after his death, Rosa Parks refuses go to the back of the bus, and the Civil Rights movement begins in earnest.

July 24, 1915. More than 800 people drown in the Chicago river as the Eastland capsizes. Many of the victims are employees of Western Union, heading to their annual company picnic. The Cubs are in Boston playing the Braves at Fenway Park. They manage only two hits against Braves pitcher Dick Rudolph, and lose the game 1-0.

July 25, 1965. Bob Dylan shocks the music world by going electric at the Newport Folk Festival in Rhode Island. The Cubs are at Wrigley Field for a double header against the Pirates. They lose the opener, but Wildman Bill Faul three hits the Pirates in game 2 for a 5-0 Cubs victory. Billy Williams and Ron Santo both homer against former teammate Don Cardwell in the game.

July 26, 1975. “The Hustle” by Van McCoy hits #1 and sparks a national disco dance craze. The Cubs are in Chicago, losing in extra innings to the New York Mets. Dave Kingman launches a homer for the Mets against Cubs pitcher Ray Burris.

July 27, 1974. President Richard Nixon is charged with first of three articles of impeachment. The Cubs are at home against the Cardinals. The Cards win the game on a throwing error during an attempted Lou Brock steal of second base. Brock sets the record that year with 118 stolen bases.

July 28, 1929. Future first lady Jaqueline Bouvier (Kennedy) is born in New York. The Cubs are in the midst of a pennant winning season, and beat the Phillies 7-2 at Wrigley Field. Riggs Stephenson hits a three run homer for the Cubs, and Guy Bush gets the win.

July 29, 1981. Prince Charles marries Lady Diana Spencer in a fairy tale wedding in London. The Cubs and the rest of the baseball world have plenty of time to watch it on television, because baseball is on strike.

July 30, 1956. President Eisenhower signs a law officially declaring “In God We Trust” the national motto. The Cubs are in the birthplace of the nation, Philadelphia, for a double header against the Phillies. They lose both of them, despite homers from Moose Moryn in each game.