Why Cubs-Red Sox opener at Wrigley felt so familiar

On Alex Cora’s last trip to Wrigley Field, he found Theo Epstein and Cubs officials partying on the field at

Historical Events (August 28–September 3): Where were the Cubs? 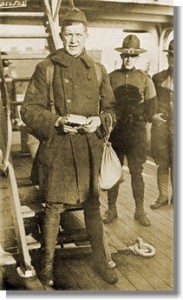 September 1, 1918
For the first time in baseball history, the season was ended a month early, by mutual agreement between baseball and President Wilson. Baseball was hit hard by the World War I. Some of the greatest players were shipped out. Cubs pitcher Grover Cleveland Alexander was among them. He reported for duty on April 30th. (Photo: Alexander in uniform)

Even though attendance dipped to an all-time low, play continued, and the Cubs were having a great, if tempestuous year. On Memorial Day, with our American boys fighting in Europe, the Cubs had a huge fist fight on the field. Cubs catcher Bill Killefer got into an argument about a foul ball with Greasy Neale of the Reds. It escalated quickly into a fight. Neale pinned Killefer to the ground and was punching his face mercilessly when Hippo Vaughn stepped in to stop the fight. It took most of Greasy’s teammates to get him back into the dugout. The Cubs won the game, but Killefer lost a healthy nose.

The Cubs kept on winning, although fewer people turned out to see the games. By then Wrigley Field (still known as Cubs Park) had become a dangerous place for “slackers” (men who hadn’t yet registered for military service). They didn’t just take your tickets at the gate, federal agents were standing by to check everyone’s registration card to make sure there were no draft dodgers attending the games. Anyone of draft age who didn’t have a card was held for investigation. Scores of fans were led directly to military bases and inducted into the service.

The government crackdown continued across the country. All draft-age men were told that they had until September 1st to find an essential job or they were going into the armed services (by then the draft ages were 18-45). President Wilson ruled that baseball wasn’t considered essential, so MLB voluntarily shortened the season to 140 games, and ended it on September 1st. The President gave a two-week waiver to any players playing in the World Series.

Without September games to lose, the Cubs made the World Series, and faced the Boston Red Sox. Despite the pomp and ceremony of the World Series, there was never a moment that the cities of Boston or Chicago didn’t realize they were a nation at war. 60 airplanes flew over the ballpark in formation–the very first flyover in history–and fans oohed and aahed.

In addition to the war, the world was in the midst of a flu pandemic. Thousands of people were dying every day. People were urged not to go to public places where they could contract the disease. This helped keep attendance down for the series as well. Many spectators actually wore masks to protect themselves.

In 1919, baseball returned to it’s former status. By the time the next World War occurred just over twenty years later, the sport would be treated very differently by the President and the nation at large.

August 28, 1963. Martin Luther King Jr. delivers his “I Have a Dream” speech in front of the Lincoln Memorial in Washington D.C. The Cubs are playing the Phillies at Wrigley Field. Future Cub Johnny Callison hits a homer in the 7th inning to provide the margin of victory in an 8-7 Phillies win.

August 29, 1958. Michael Jackson is born in Gary, Indiana. The Cubs lose to the Cardinals 7-5 at Busch Stadium in St. Louis. Future Cub Larry Jackson gets the win for St. Louis.

August 30, 1880. Apache Chief Diablo, who had vowed to work with the white man, is killed by fellow Apaches. The first place Cubs (then known as the White Stockings) are in Worcester Massachusetts, losing 7-4. Pitcher Larry Corcoran, in his first season with Chicago, takes the loss. He has started 23 of the team’s last 24 games.

August 31, 1888. Jack the Ripper claims his first victim in London. He will never be caught. The second place Cubs (then known as the White Stockings) are in Indianapolis to face the last place Hoosiers. They didn’t see the 14-0 trouncing coming. Recent Irish immigrant John Tener takes the loss.

September 1, 1939. The Germans invade Poland—ending all doubts about their plans—and beginning World War 2. The Cubs are in Brooklyn playing a double header against the Dodgers. They split the two games. Larry French wins his 11th game of the season in the opener.

September 2, 1969. The first ATM is introduced in New York at Chemical Bank in Rockville Center. The Cubs are in Cincinnati beating the Reds 8-2 behind the pitching of Fergie Jenkins and the hitting of Glenn Beckert. They still have a five game lead over the Mets.

September 3, 1914. A new pope is named just after the outbreak of World War 1. He takes the name Benedict XV. The Cubs beat the Reds at Redland Field, 7-0. Bert Humphries scatters eight hits for the shutout.

One Response to “Historical Events (August 28–September 3): Where were the Cubs?”