Historical Events (April 2–April 9): Where were the Cubs? 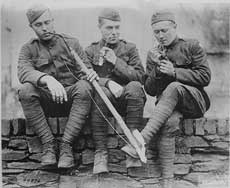 Less than one month after beginning his second term in office, President Woodrow Wilson asked Congress to declare war on Germany to keep the world “safe for democracy.” They obliged. The war didn’t immediately affect the national pastime. At first the American public rallied around the flag, and enlistment in the Army was robust. The Cubs did their part too. They booked a demonstration at Wrigley by Canadian Highlanders to encourage recruiting. Recruiting booths were set up around the ballpark to facilitate the process.

The following season was a different story. Gruesome stories from the war started coming home, and people no longer wanted to enlist, so it became compulsory. Even though the Cubs were heading toward the NL Pennant, attendance hit an all-time low. That may have had something to do with the military’s presence in the ballpark. By then Wrigley Field (still known as Cubs Park) had become a dangerous place for “slackers” (men who hadn’t yet registered for military service). They weren’t just checking tickets at the gate, federal agents were standing by to check registration cards to make sure there were no draft dodgers attending the games. Anyone of draft age who didn’t have a card was held for investigation. Scores of fans were led directly to military bases and inducted into the service.

It’s funny how much that’ll put a crimp into your box office receipts.

~April 3, 1984. Alderman Eddie Vrdolyak easily wins re-election as head of the Cook County Democratic organization, considered a rebuff of Mayor Harold Washington. The Cubs open their season in San Francisco, with a 5-3 win over the Giants. Opening day starter Dick Ruthven will be the #5 starter on the Cubs by the end of the season.

~April 4, 1994. Netscape is founded by recent University of Illinois graduate Mark Andreessen. It’s opening day for the Cubs in Chicago, and with the first lady Hillary Clinton at Wrigley Field, Tuffy Rhodes hits 3 homers in 12-8 loss to the Mets.

~April 5, 1982. Former Supreme Court Justice Abe Fortas, who had resigned in scandal in 1969, dies at the age of 71. The Cubs beat the Reds on opening day in Cincinnati, 3-2 in a rain shortened game. Catcher Keith Moreland drives in two for the Cubs. It is Ryne Sandberg’s debut in a Cubs uniform. He bats seventh, plays third base, and goes 0 for 3 with two strikeouts.

~April 6, 1973. The American League plays its first game with a designated hitter, Ron Blomberg of the New York Yankees. The Cubs have their opening day without one, and win in dramatic fashion at Wrigley Field. Tony LaRussa scores the winning run in his only game as a Cub.

~April 8, 1994. Rock star Kurt Cobain is found dead in his home outside Seattle. Steve Trachsel leads the Cubs to 4-0 victory over Pedro Martinez and the Expos in Montreal. Shawon Dunston hits a homer.

2 Responses to “Historical Events (April 2–April 9): Where were the Cubs?”